Believe it or not, six months have passed since the last Intertain meeting. For the second half of 2015, my wife and I have been largely occupied with renovating and moving into our very own apartment. The process is at an end, and we are thankful to be able to settle in and recommence this ministry with a newfound freedom.

There are now two guys staying with us as tenants and friends, both of whom decided to take part in our latest gathering. While Kai was no stranger to Intertain, it was going to be Jimmy’s first encounter, and he seemed eager to check out what we had in store.

There was also a special guest among us. Dan Anderson, who pastors Trinity Chapel Macquarie, was one of the first that encouraged me to pursue the vision and ideas I had for Intertain. It was exciting to finally show him how the group functions after all this time.

The dictionary defines freedom as “the power to determine action without restraint”, which really hits home for me, having just crawled out from under my parents’ influence to establish a domain where I get to call the shots on a daily basis.

There is someone else who commands this type of freedom on a much greater scale. We began the session by reading this self-introduction in Isaiah 46:9-10.

I say, “My purpose will stand, and I will do all that I please.”

Where do you think freedom comes from?

Despite lacking in physical form, the element of wind is a worthy embodiment of freedom: it is powerful, blows where it pleases, and cannot ever be shackled. To study this further, we got Jimmy to try out Flower, a game that lets the player become an invigorating breeze over idyllic scenery.

The use of motion controls was challenging for Jimmy, and what was designed to be a relaxing journey became rather intense. However, his wild and erratic manoeuvres were demonstrative of the wind as something untameable; that even when represented as a virtual gust, it remained a force resistant against human manipulation.

In the Greek New Testament, the same word (pneuma) is used to mean both “wind” and “spirit”. There are parallels between the two, and 2 Corinthians 3:17 suggests that the Spirit of God isn’t only unfettered like the wind, but also acts as the source of freedom in our world:

The Lord is the Spirit, and where the Spirit of the Lord is, there is freedom.

Jimmy eventually sharpened his attunement with the wind, and together they released a liberating influence over the land, highlighted by blooming flowers that offered their petals into the air through a gentle, aeolian lift. The current carried them over a hill, past a valley, and then into a climatic swirl before a great tree. Upon reaching this end, Jimmy concluded from his experience: “All this freedom would be useless if one lacks control.”

Have you ever been freed from captivity?

As inhabitants of a “free country”, we had little to share regarding personal experiences of captivity. One of the more relevant examples was perhaps Dan’s memory of being grounded as a child.

In BioShock Infinite, there is a girl named Elizabeth who has been grounded, ironically speaking, in a floating city above the clouds. In fact, she has been confined in a tower pretty much since birth; her prison is also her home. It seemed rather sad, so we sent Dan on a rescue mission.

Upon entering the tower, Dan discovered that those who had Elizabeth locked up were just as much fascinated by her as they were frightened. On one hand, they studied her like a specimen — the rooms were full of observational reports, graphs, and display cases related to her growth and development. But further along, cautionary signage dominated the décor, as well as a complex siphon installed to curb certain powers of the subject, whom they perceived as a freak.

Ultimately, it didn’t matter much, as Dan found success in completing his objective. Elizabeth flew out of the cage for the first time in her life and landed on a sunny beach, where she danced among a crowd in celebration. It was a joyful ending as far as we were concerned.

However, long-term incarceration wasn’t something that we could really relate to… At least not of a physical nature. Angela raised the distinct possibility that some of us might be entrapped by emotional burdens. May remarked on how we could be caught under the pressures originating from our family background or, more broadly, the culture that we belong to. We began to wonder if we, too, needed saving in one way or another.

Some of the first-century Jews surely didn’t think so when they were offered the path to freedom. Their exchange with Jesus is presented in John 8:31-36.

To the believing Jews, Jesus said, “If you hold to my teaching, you are truly my disciples. Then you will know the truth, and the truth will set you free.”

They answered him, “We are Abraham’s descendants and have never been slaves of anyone. How can you say that we shall be set free?”

Jesus replied, “Very truly I tell you, everyone who sins is a slave to sin. Now a slave has no permanent place in the family, but a son belongs to it forever. So if the Son sets you free, you will be free indeed.”

It was with pride that these Jews rejected Jesus. They would rather trust in their own lineage than in the Son that God had sent. Furthermore, they seemed to be in denial of historical occasions when Israel had been captives of other nations, in addition to the fact that they were, at that time, under Roman occupation, which didn’t exactly evoke a picture of freedom.

Irrespective, Jesus was talking about a deeper form of captivity: one that is caused by sin. Of course, this affects more than just the Jewish population, as it confines all humanity to a prison isolated from God. But fear not, for as quickly as Jesus revealed the bad news, he pointed to the fantastic truth about his involvement in a rescue mission focused on transforming us from slaves without status to children in God’s family who could enjoy the freedom and life that is only found in Christ.

No doubt that is something worth dancing about!

Can freedom coexist with slavery?

Journey to the West is a classical Chinese novel of great renown in Asian cultures. While kids in the Western world committed their attention to Disney animations, those in the East became acquainted with this peculiar tale of a monk and a monkey. What I didn’t know, as mentioned by Dan, was that the Australian Broadcasting Corporation used to air Monkey Magic, a 70s TV show based on the story, with reruns continuing on to the turn of the century. All this was brought up because our final game also takes inspiration from the legend, even if much of it is reimagined.

We nominated Kai, known for his audacious button-mashing, to swing into Monkey’s shoes in Enslaved: Odyssey to the West. The introductory chapter began on a flying slave ship from which he attempted escape. Kai’s foolhardy approach worked in this case thanks to Monkey’s deftness in combat (with his signature staff), and his ability to traverse irregular structures like a gymnast on steroids. All seemed to be going smoothly until he saw that Trip, a girl with a knack for computer hacking, was racing him to the escape pods while the entire ship headed for a crash. 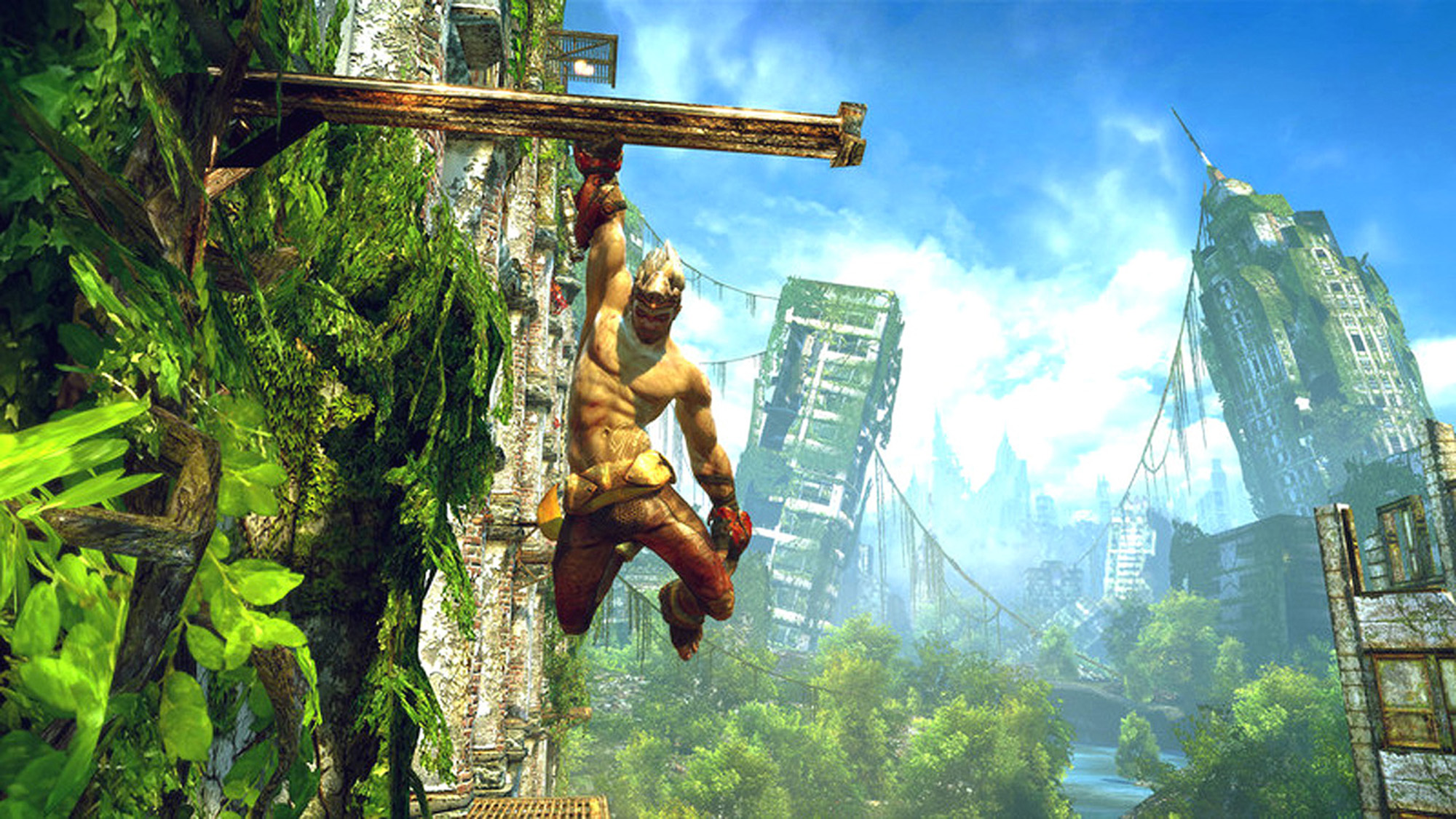 Though strong and agile, Monkey was outwitted by his opponent. The girl made it to the last pod and ejected from danger, but not before a stubborn Monkey grabbed on to the exterior frame in a desperate effort to reach safety. The landing knocked him unconscious for some time, yet there he was — a little roughed up, but still breathing and, more notably, free!

Or so he thought…

Monkey awoke with a splitting headache. Concussion would have been a reasonable diagnosis had we not noticed a suspicious piece of accessory that appeared to have found its way onto his noggin. It turned out that Trip had taken a slave headband from the ship and used it on the poor guy. Monkey’s was now under the hacker’s mercy and command; he had simply escaped from one master into the hands of another. Freedom had once again fled from his grasp.

We discussed the irony, and whether or not “total freedom” is possible for any of us. As the conversation went deeper, it seemed clear that humanity’s status will always be a mix of subservience and liberation, which isn’t necessarily a bad thing. Romans 6:12-22 showed our group two very different paths, each with its own freedoms and restraints.

Don’t you know that when you offer yourselves to someone as obedient slaves, you are slaves of the one you obey — whether you are slaves to sin, which leads to death, or to obedience, which leads to righteousness? But thanks be to God that, though you used to be slaves to sin, you have come to obey from your heart the pattern of teaching that has now claimed your allegiance. You have been set free from sin and have become slaves to righteousness.

When you were slaves to sin, you were free from the control of righteousness. What benefit did you reap at that time from the things you are now ashamed of? Those things result in death! But now that you have been set free from sin and have become slaves of God, the benefit you reap leads to holiness, and the result is eternal life.

It was a bit of a spoiler, but I told everyone that the two protagonists of the game grew very close together in the long run. It got to a point where Trip wanted to deactivate and remove the headband, but Monkey volunteered to leave it on as a symbol of connection and sacrifice. A few in our group said it sounded dark and twisted, but regardless, I think they understood the metaphor.

← A Deeper Home
Times for Change →