It was a sizzling day; the torrid air measured 43 degrees Celsius. Friends gathered at my sanctuary, where I kept the air con pumping nonstop. In the cool respite, we spent time visiting digital worlds created by man and thought about how they related to matters of truth and life.

From my church community came three new participants to Intertain. David and Janice are a couple who enjoys the fun that Nintendo offers, such as that of Mario Kart. Daniel, on the other hand, likes his virtual driving to be more realistic, preferring titles under the Gran Turismo banner.

Videogamers are nomadic adventurers. We set foot on numerous lands and often find ourselves in awe of their grandeur and beauty. These settings allow us to appreciate the craft of world-building, as well as the designers behind the scenes.

The connection could be drawn to observations of our own universe. As we sat around and listened to Han Sol reciting of the creation account in Genesis, a sense of wonder permeated our minds.

Following a quiet contemplation, Janice took a dive into the aquatic spectacle of Abzû — no better day to go for a swim, I suppose! 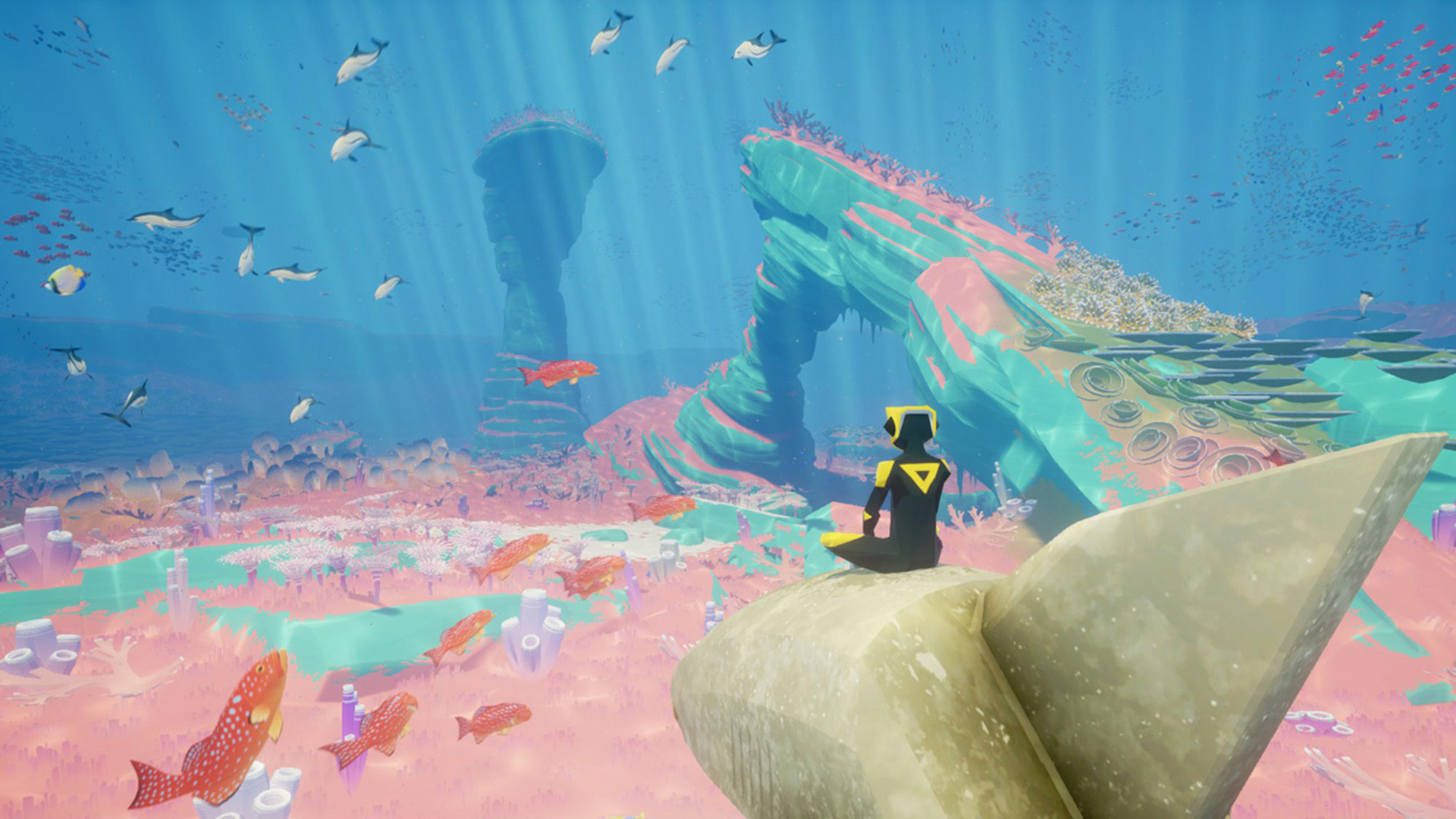 Do you think our universe exists by God’s design?

No Man’s Sky was one of the most talked about titles of last year, but not always for the right reasons. Nevertheless, if there was one aspect that delivered, it was the sheer magnitude of its digital cosmos. The procedurally generated space discovery experience offered 18 quintillion full-sized celestial bodies to explore. Even if a player visited one of these planets every second, and could travel between them instantly, seeing the whole game would still take 585 billion years.

Daniel had 15 minutes with the controller, so to say that he only scratched the surface would be the understatement of an eternity. Such is the withering, infinitesimal nature of man, who is but a momentary speck of dust among the unfathomable immensity of the universe entire. This becomes ever apparent upon knowing that reality is, in fact, immeasurably bigger than this “tiny” game. 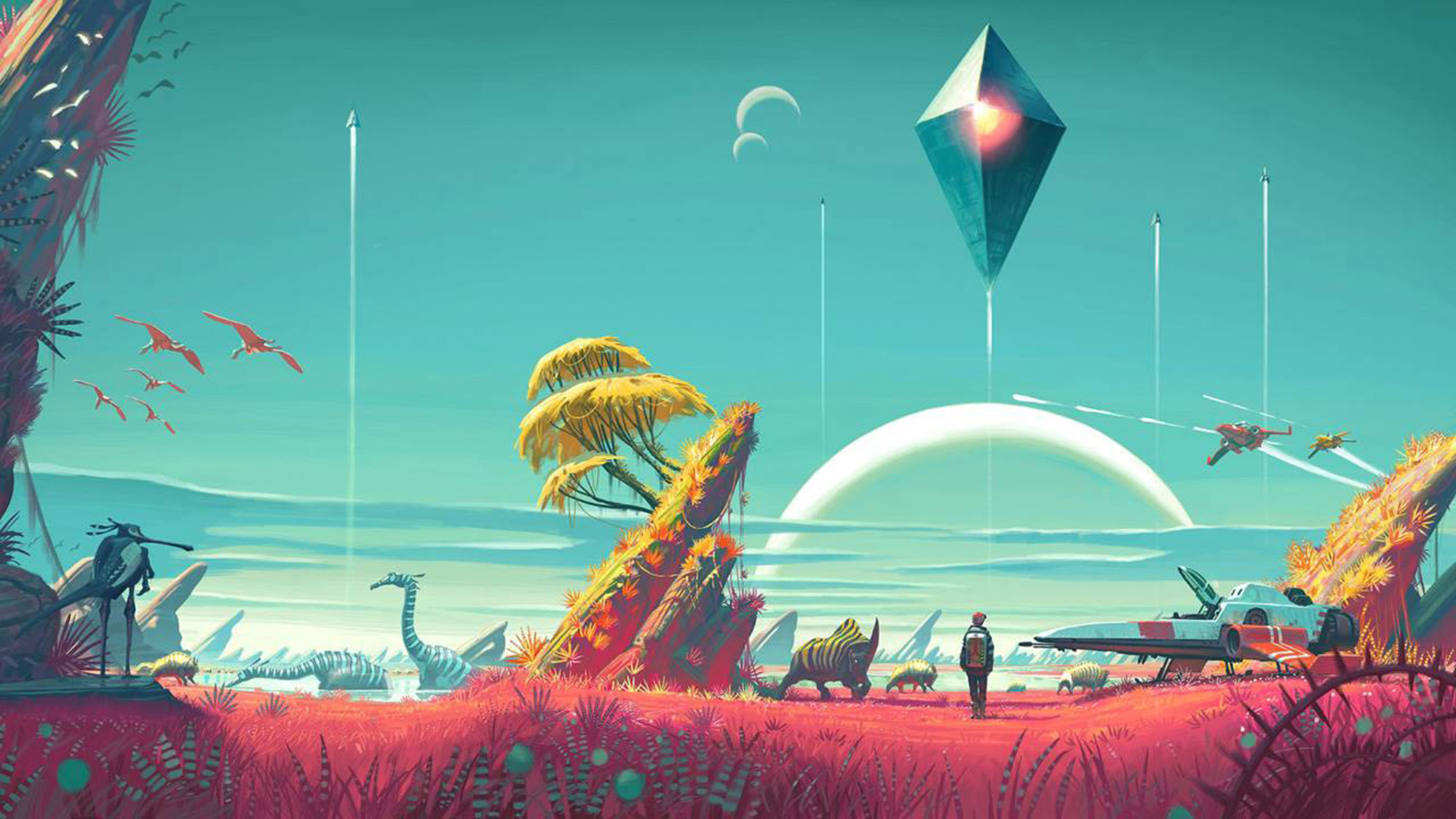 A nightmare for completionists.

But it isn’t just the grand scale of the universe that amazes; the intricacies within the systematic workings of the natural realm display an extraordinary level of care and intent. As Clement went on to point out, all living creatures on earth appear to have a functional role by which they become integrated into their respective ecosystem. Everything plays its part in our relational world.

Taking a step back, Janice remarked on the highly precise conditions that must be met in order for life to even exist, the study of which is called: the science of fine-tuning. Over the decades, scientists have identified more than 200 parameters necessary for a planet to be habitable. Fulfilling every requirement to perfection takes a mind-blowing miracle, if not an all-knowing, all-powerful Creator. We continued this inquiry with a short educational video (Does Science Argue for or Against God?), ultimately reflecting on a quote by Dr. John Lennox, professor of mathematics at Oxford University:

The more we get to know about our universe, the more the hypothesis that there is a Creator gains in credibility as the best explanation of why we are here.

What can we learn about God through his creation?

Special revelation is a theological term referring to the knowledge of God discovered through supernatural means, such as miracles or divinely-inspired Scripture. General revelation, on the other hand, grants humans insight via the natural order. By examining his visible works, we gain a glimpse of the existence and characteristics of the unseen Creator.

The Beginner’s Guide presented us with a similar opportunity. David hopped on the game and, accompanied by a perceptive commentator, led us to experience a series of short levels that served as revelations of their reclusive designer: a man named Coda.

The first few levels looked familiar to the Counter-Strike player that David once was, except for the fact that there weren’t any enemies to fight. Eventually he encountered a transcendent glitch interpreted to be the catalyst from which Coda began to approach games development with more personal and philosophical bearing.

The following segments were forthcoming in their experimental approach. Starting with one where backward movement was the only way of getting around, David stumbled through a metaphoric maze that exemplified Coda’s uncertainty of his future. Later on, a pair of spatial configurations worked together to convey a common point of limited perspective — in one case, a dull exterior concealed a rich interior; and in the other, a simplistic interior hid away a fantastic outer world.

These designs hinted at Coda’s personality and concerns. We got to know him a little, even though we wouldn’t ever meet the guy. Applying the same methodology to the study of the physical universe, one might very well discern a powerful, relational Creator behind it all, an intelligent being who has a thing for order, harmony, and variety. Bestowing upon humanity the privilege to enjoy the works of his hands is God’s invitation for us to acknowledge him. Not everyone would give credit where it is due, hence Romans 1:18-19 state:

The wrath of God is being revealed from heaven against all the godlessness and wickedness of people, who suppress the truth by their wickedness, since what may be known about God is plain to them, because God has made it plain to them. For since the creation of the world God’s invisible qualities — his eternal power and divine nature — have been clearly seen, being understood from what has been made, so that people are without excuse.

Where were you when God laid the earth’s foundation?

A strong foundation is the vital first step to any constructive work, especially if tall structures are your fancy. Our time with Tricky Towers demonstrated this truth, the game being a couch multiplayer affair focused on building with tetromino blocks.

Controllers were passed around and everyone participated in a tournament. The mode that we committed to involved racing to the heights. Some of us stacked in haste, gaining much verticality early on without a sturdy base. These towers came crashing down before touching the finish line. Others overcompensated and fixated so much on width as though they distrusted the solid ground beneath. These towers didn’t get very far upward. In the end, it was Janice who struck a neat balance between speed and stability. And with a little help from magical vines, she assembled a graceful pillar that stretched its roots and scraped the skies, soaring above all competition.

“Where were you when I laid the earth’s foundation?” was the rhetorical question directed at a restless Job back in the day. The Lord, who provided the cornerstone on which our cities are built, demanded humility from man. Furthermore, as cornerstones go, the New Testament reveals yet another — the eternal Rock older than creation, and upon whom our lives are established and redeemed: Jesus Christ himself. In light of this, KJ concluded our evening by urging us to respond to the One who has laid such firm foundation. That is to say, while our eyes may ever be dazzled by creation, our hearts must turn to the Creator. We circled back to the first chapter of Romans, one that persists with the admonitory plea from verse 20:

For although they knew God, they neither glorified him as God nor gave thanks to him, but their thinking became futile and their foolish hearts were darkened. Although they claimed to be wise, they became fools and exchanged the glory of the immortal God for images made to look like a mortal human being and birds and animals and reptiles.

Therefore God gave them over in the sinful desires of their hearts to sexual impurity for the degrading of their bodies with one another. They exchanged the truth about God for a lie, and worshipped and served created things rather than the Creator — who is forever praised. Amen.

And so it became our hope that together we shall worship the Maker, not what is made.